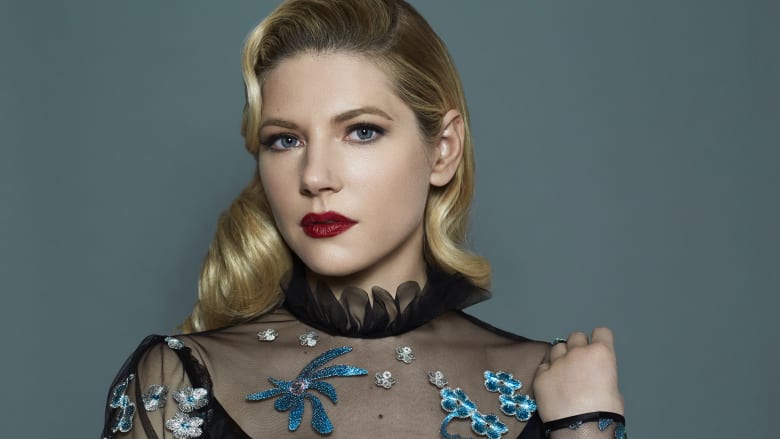 She made the leap of faith around the turn of the century, and moved to New York to study acting. “Only two per cent of female actresses actually make it, so I knew my odds weren’t high, but I wanted to give it a go,” she explains. “Like any actress trying to make it, I took whatever I could to survive in the beginning.”

Katheryn regularly landed minor roles in films such as 2002’s Two Weeks Notice and 2004’s 50 First Dates, and appeared on TV stalwarts such as CSI:NY and Criminal Minds. The 2009 comedy drama Cold Souls led to an appearance on Vanity Fair’s “starlet of the month” page, and her role as Charlie Sheen’s screen girlfriend in A Glimpse Inside the Mind of Charles Swan III provided further exposure.

In 2012, to convince the producers that the role of Queen Lagertha should be hers, she smeared dirt on her face for a second audition with Vikings writer Michael Hirst.

“When I read the first two episodes of Vikings I knew the show was special, and if people responded to my character the way I envisioned it, I knew it would work,” she explains. “I was a huge fan of Michael Hirst, but I didn’t expect my role to keep going for as long as six years.”

Katheryn brings both intellect and sex appeal to the Viking era (series one begins in 793AD), not to mention a blonde ambition that would make Madonna blush. She delivers her lines in Old Norse, using a mash of German and Scandinavian accents, and has just directed her first episode for series six, which is yet to screen.

Katheryn never imagined that taking on the role of Queen Lagertha would make her a feminist role model. But she says Lagertha’s fierce character is an encouraging sign for women in the age of #timesup and #metoo.

“Lagertha runs a male army and is in a position of authority,” Katheryn explains. “But she is a woman who comes with vulnerabilities, responsibilities and extra pressures that men don’t have, like dealing with sexual advances.

“Lagertha can’t let emotions lead her and she tries to be a different kind of ruler. She’s strategic rather than after revenge and bloodshed. She brings intelligence to the decisions she makes under pressure.”

Katheryn believes the storyline of Lagertha, a woman who stands up for what she believes in, and isn’t afraid to fight for what she wants, has many parallels with modern life.

“What is really important is that women should speak up and have a strong voice and not be afraid to do so. I get a lot of letters from women who are going through abusive relationships, or coming out of them, and some from survivors of sexual assault who say my role has helped them. Teaching self-defence is a big passion of mine but I feel now, more than ever, we need strong female role models on TV to teach women to stand up and fight for equality.”

While Katheryn’s home is in Venice Beach, California, she bases herself in Ireland when filming Vikings, which is almost entirely shot in County Wicklow. Along the way, she has forged close-knit friendships with the other actors and crew members.

“We film up to four episodes in a day and the thought of taking 12-hour flights from Ireland to LA regularly didn’t appeal to me,” she says. “I didn’t want to be on set dealing with jet lag, so I’ve made Ireland my home away from home for the time being.”

Playing the love interest and wife of King Ragnar, played by Echucaborn actor Travis Fimmel has been a highlight for Katheryn. She’s grown attached to his prankster ways on set, but downplays suggestions they were romantically involved off-screen.

“I love Travis for his impulsive ways – he’s childlike and freeflowing,” she says. “In saying that, he’s also a prepared actor. It might sound contradictory, but you just have to go with what you get from him. He keeps me on my toes when I play alongside him.”

Travis’s departure in series four sparked doubts among hardcore Vikings aficionados about the show’s future. “The sons of Ragnar have done a great job in keeping the spirit of the Vikings alive, and it’s evident that it’s still a popular and much-loved series,” Katheryn says.

Katheryn never expected her own character, Lagertha, to last beyond the second season. However, she knows that she too will have to eventually move on if she is to grow as an actor. “When you give your heart, soul, sweat and tears to a role for so many years, it gets to the point as an artist where you ask yourself whether you can do it any more,” she says.

While she’s carved out the top job of Queen on the screen, Katheryn still has to fight for equal pay when a male colleague gets a pay rise. “Hollywood is under immense pressure right now,” she says of the way the Weinstein and Cosby scandals are being felt in the corridors of decision-makers.

She observed a small shift recently when she met with a top Hollywood producer in his studio and the producer asked his assistant to be present. “He was there to make sure things are properly recorded, which was a smart way to handle the extra pressure with the #metoo movement,” she says. “It was different and not what I am used to, but I respected it.”

Right now, Katheryn is focused on acting and the opportunities it brings her, making no mention of a partner or plans to start a family. In 2016, she was the face of a Raymond Weil luxury watch campaign and by the end of this year she hopes to launch a T-shirt line with a renowned designer (she is tight-lipped about the details). And she’ll soon be seen on movie screens alongside John Travolta, Jennifer Esposito and Jordi Mollà in the speedboat racing saga Speed Kills.

“For me, the future is about doing the best I can as an actor,” Katheryn says. “I’d be lying if I said it’s not a dream to win a Golden Globe – in fact anyone who says that isn’t telling the truth. But I get enough gratification knowing that I give my best shot.

“The awards are not what drive me. I have friends and family to tell me I’m doing a great job. I have a long way to go, and a lot more to learn.”

Press: San Diego Comic-Con 2018: ‘Vikings’ Panel Will Include A New Trailer For Season 5

This site uses Akismet to reduce spam. Learn how your comment data is processed.